Ten years of European bioeconomy: Chris Patermann talks about the goals and challenges

Chris Patermann is considered the father of the European bioeconomy and is still a central figure in the global bioeconomy community. In this exclusive interview, 10 years after the first Bioeconomy strategy launched by the European Commission, he talks about the new challenges we are facing to make the new economy based on biological resources happen. 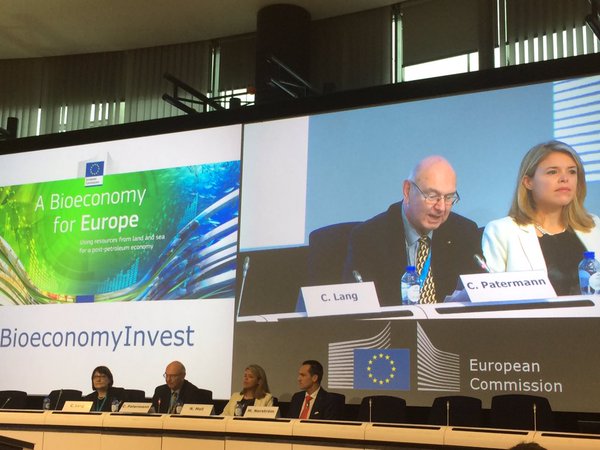 Ten years have passed since the first European Bioeconomy strategy. What are the major steps forward made in this period, from your point of view?

I note many interesting steps forward during the last 10 years: very relevant is the up-date of the strategy 6 years later in 2018. This updated strategy and Action plan I regard as decisive for its continuation, implementation and vision, all factors for a success of a strategy.
The update impressively focuses on accompanying new trends such as digitization and Artificial Intelligence, emphasizes even more the importance of planetary boundaries and the biosphere, references the growing role of regions as drivers for the future and highlights the still largely underestimated role of urban and peri-urban regions as a driving force for the bioeconomy.
In addition I see very good advances in shaping bioindustries in Europe; BBI and BIC are a true success stories, other continents envy Europe for it. I am glad that Circular Bioeconomy Europe (CBE) will continue this process, although I had wished more speed in the relevant decision processes, looking at what “friendly competitors “in the US and Asia are planning in this respect as well.
And last but not least the number of national and regional strategies in Europe, regrettably still with the exception of Eastern Europe, has impressively increased. I observe however with some concern the growing complexity of rules, strategies, impacts of neighbouring initiatives which sometimes seem not to be that well coordinated as they should be, to accompany and influence the development of biobased economies in Europe. You can find this fabric of complex issues described in a very good position paper very recently published by CEFIC, to illustrate the enormous potentials of a bioeconomy for the chemical industries in Europe which remain still widely untabbed and might even be hampered in the future by these complexities. This represents a true challenge, maybe even threat for the development of the concept of biobased economies in practice. But I am optimistic, that in the already today visible competition among strategies worldwide to cope with the future of our planet, the concept of biobased economies, with Biotechnology as the primary, but not exclusive technology-driver, will find its well deserved place, because of its undoubted Unique Selling Points, ranging from renewability, circularity to innovation. But these advantages must really be well and understandably sold!

There is a lot of talk about the Green Deal and the ecological transition, but then in essence there still seems to be a strong prevalence of the interests of fossil fuel producers in political decisions around the world. What to do for a real change of economic and social paradigm in the European Union?

Very difficult question. I see here the potentials of the EU as rather limited: the interests are too different among member states, even among regions. The Green Deal concept might be a game changer in this respect. I see the member states and regions also to take a complementary lead. But apart from that, we must in the same strong way join forces to demonstrate that it is not only Europe to practise a Green Deal, but this is a global task for all continents. Many scientists claim with right, that the responses to the planetary challenges can only be given on planetary scales. The chances to persuade our continental neighbours in this direction might have improved when looking at the planetary impact of the pandemic. The EC should also trigger such a global initiative in parallel to our European Green Deal, not as a teacher, but as a friendly neighbour! And here I see a very interesting opportunity for the ideas of a bioeconomy, looking at the recent strong increase in new national strategies and action plans for instance in Latin America (Costa Rica, Uruguay, Colombia, the Brazilian State of Para in Amazonia). The USA and Canada as biomass giants could, within the Western Hemisphere also be more active, the first one by updating its 10 years old strategy, and the latter one finally arriving at a national strategy. This is also true for Russia and the Republic of China which had been more active in biobased activities many years ago.
A final remark on this topic of globalisation and multilateralism: multinationally speaking, the bioeconomy has not yet found its strategic institutional Global Home: UNEP, UNIDO, FAO, OECD, G-20 or something new, a consortium of international bodies to host it globally? I think it is also time to reflect about such a possibility, looking at the wonderful model how climate and global changes made their way into international bodies like in COP. A similar process would sharpen the attention and interest worldwide on and on a stronger sustainable use of biological resources as the foundation of new concepts for the future.

The effects of climate change are very evident in all their destructive extent: the floods in Germany last summer, the drought in Southern Europe, without forgetting the flood that hit Sicily at the end of 2021. How important is it to have a cohesive European Union to face the challenge of climate change?

How feasible is the goal of climate neutrality by 2050, from your point of view, given the current situation?

If you look at the conditions of life surrounding us at the beginning of the nineties in the last century, how much they have changed, I think it is possible. For me the key enabling factor to reach that date will be Responsive Innovation, globally applied, as inclusive as possible, and last but not least that we can afford it in the largest sense of the word!

How fashion brands can ensure a more sustainable supply chain

This is how the circular economy can help stop biodiversity loss

Sustainable finance: investments for the circular economy are moving forward