Enough Is Enough: Overpackaging in the Food System

In Europe alone, the demand for plastic is close to 50 million tonnes a year, 40% of which is packaging. And almost entirely single-use. This is too much. Examples of overpackaging mostly come from the food sector. But when, and why, did we take the step from necessity to excess? And more importantly, how can we change course?

Two hard-boiled eggs, peeled and packaged, nestled – almost as if they were precious ornaments – in a plastic container, with a transparent lid and a card-paper wrapping, on which the brand, certifications and expiry are written. This is the latest example of food overpackaging that caused a wave of indignation. And it did not come from the motherland of fast food across the pond, nor from an Asian convenience store where even mandarin wedges are individually packaged. These “timesaving” eggs can be found in European supermarkets. After all, they’re not too different from all the ready-made salads found in offices and supermarkets across the continent, to no-one’s indignation.
But how, and most of all why, have we gone from fresh eggs wrapped in newspaper to the masterpieces of overpackaging that fill supermarket shelves today?

While there are excesses that almost scream the absurdity of their existence from supermarket shelves, it is generally not simple to define a clear boundary between useful, legitimate packaging, and superfluous, harmful overpackaging. Erik Ciravegna, Professor of Packaging Design at the Pontifical Catholic University of Chile, says it is all relative. “First of all, we need context. Things that appear nonsensical to us today were hailed as consumer experience and marketing innovations in the 1990s.” If we put ourselves in the shoes of the companies that have to overcome the competition in ever more crowded markets, the idea that “we’ll peel your eggshell so you save time” can even seem like a brilliant novelty.
Unfortunate gimmicks aside, packaging does perform some essential functions that cannot be avoided. Ciravegna explains that, firstly, it must protect and preserve its contents; it must be functional throughout the distribution chain, from transportation to being displayed in shops; it needs to present information about the product; finally, it needs to allow for brand recognition and attract buyers’ attention. Packaging is both a crucial logistical tool and a powerful means of communication. “The secret is finding the balance between excess, which has an environmental impact, and lack of packaging, which can lead to other problems, such as food deterioration or contamination, or a lack of protection for particularly delicate foods.” 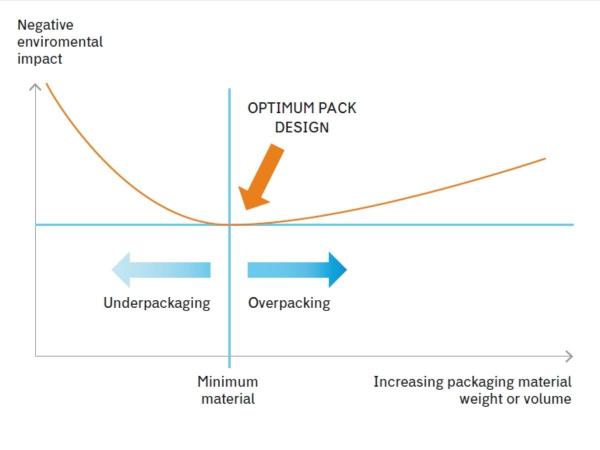 The Soras Curve was developed by Innventia AB, a major Swedenbased R&D company

“Packaging – plastic packaging especially – is always singled out as the villain. But who made it be ‘the bad guy’?” Erik Ciravegna does not like to blame just one category, especially not if it is made of inanimate objects. “The problem is not plastic, which is a material with extraordinary properties, extremely useful on many occasions. We are the problem, with the habits we cannot give up, the way we produce, use, and dispose of plastic. The problem is single-use.”
And it is a problem that has become unsustainable. According to Unwrapped – a report drafted in 2018 by Zero Waste Europe and Friends of the Earth for Rethink Plastic – Europe’s demand for plastic has reached 49 million tonnes a year, 40% of which are used for packaging, almost entirely single-use. It is estimated that 95% of the value of packaging is lost after first use. The UN has calculated that the global cost of plastic in the food industry, in terms of natural capital, equates to around 15 billion euro per year.
Now, if it is true that everyone bears responsibility, we must find a way to trigger a virtuous cycle, encouraging consumers to abandon bad habits, incentivising producers to deploy reusable packaging, and driving large-scale retailers to sell products with minimal packaging. “We should get everyone round a table and start designing solutions together,” Ciravegna suggests.
This, in a sense, is what the Sustainable Packaging Coalition is trying to do. The organisation brings together – on a voluntary basis – companies, educational institutions, and governmental organisations (NGOs are excluded) to promote sustainable packaging culture. Brands such as Ferrero, Kellogg, McDonald’s, Nestlé, Starbucks, Walmart, Barilla, Bonduelle, and DelMonte are all part of the Coalition. However, as the kind press officer explained to us, “we don’t require our members to make any hard commitments on their business operations.”

If we have to start somewhere to try to spark the virtuous cycle, perhaps supermarkets should be at the top of the list. “Throwaway convenience culture”, as it is called in a Greenpeace and Environmental Investigation Agency UK report, has become the mindset determining most of our consumption choices, especially when it comes to food. This should not be surprising, considering that large-scale distribution interacts directly with customers: a great power, with which comes great responsibility. But what is the retail sector doing? Gathering evidence from those concerned on an issue that sees them in the dock is not easy. Those to whom Renewable Matter reached out replied with press releases on their sustainability practices. Auchan Retail, for example, announced its participation in the European Plastics Pact, and that “by 2022, it will have made a strong commitment to eliminate plastic packaging for food services and self-service fruit and vegetables.” Tesco, meanwhile, mentions its ecodesign initiatives to streamline packaging for some products, or to use more easily recyclable plastics.
In the world of NGOs, these efforts are seen as valuable, but far from sufficient. “Estimates of plastic packaging placed on the market by retailers in EU Member States with high packaging intensities (such as Germany, France and the UK) suggest supermarkets alone are responsible for around 900,000 tonnes of plastic packaging per country each year,” the previously mentioned Unwrapped report reads. “We are aware that several supermarkets are trying to do something, especially those deploying packaging-free sale systems – comments Larissa Copello de Souza, campaigner for Zero Waste Europe – but there are still many obstacles, such as hygiene and safety regulations, which differ from country to country, which make it impossible to sell certain products without packaging or in reusable containers.”
There are many types of goods that are ripe for packaging reductions, starting with those that are suitable to be sold as loose items. Single-portion products are a real nightmare for packaging waste, and they have massively increased in recent years. This is also true for ready meals, pre-washed greens, cut fruit, as well as multipack variants of many products. Retailers’ official excuse is that they want customers to avoid waste and save money. But Unwrapped demonstrates that the opposite is actually true: multipacks make people buy more than they need, leading to a waste of money and of food. Ready-made or washed foods deteriorate more quickly, and are more likely to end up being wasted: in the UK, 178 million bags of pre-washed salad are thrown away every year. Overall, between the 1950s and today, plastic packaging use and food waste have increased concomitantly.

What Is to Be Done?

To find solutions, we must avoid sector-specific thinking and embrace a more holistic approach. Taking a step back, it becomes clear that “simply replacing plastic with a different material, such as paper, is not the solution, especially if we keep going with single-use,” Larissa Copello notes. Throwing Away the Future, published by Greenpeace in 2019, reports that several brands, including McDonald’s, Starbucks, Nestlé, and Nesquik, have proudly announced new cups, straws, or packaging made from paper. However, the report reveals that they have not truly considered the impact of the paper industry or the actual recyclability of this supposedly sustainable packaging. McDonald’s straws, for example, are incompatible with current recycling systems due to their thickness and the stickers they use.
Therefore, it is vital to focus on ecodesign for waste-free packaging. “It would be very useful – Copello continues – to have standardised reusable packaging for the supply chain so that producers can share costs and redeploy packaging multiple times. However, this would require legislative intervention at the European level, and the EU should also provide strong support for zero-waste business models such as packaging-free shops. The latter also collaborate with local producers, promoting shorter supply chains and overcoming many of the problems linked with large-scale distribution.” In the end, it all comes back to eggs wrapped in newspaper, like in the old days: a perfect example of circularity, if you think about it.

Download and read the Renewable Matter issue #33 about food system.

Architects of Ecosystems: Will Fungi Shape Our Sustainable Future?

Climate: will plastic be the new coal?